Merkel’s address to the Saar region

I was interested in the effect that Angela Merkel’s campaign appearances would have on AfD voters and similar. For this reason I went to Dillingen at the river Saar on September 15th, 2017, where Merkel had been expected nine days before the Bundestag elections.

Overthere I experienced amazing and cheerful things but also made shrill and malicious observations. I was insulted and thrown with badly aimed eggs, which were probably intended for Mrs. Merkel. 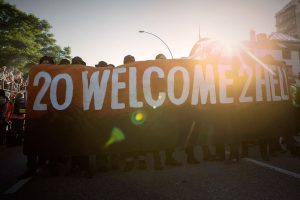